Most important elements that are required for basal metabolism include enzymes, hormones, antibodies, transporters like haemoglobin and myoglobin and structure formers like keratin, collagen, actin and myosin are proteins. The primary sources of protein include egg, milk, chicken, meat, chickpeas, soybeans, cashew and peanuts. The Indian Council of Medical Research has recommended that an adult would require about 0.8-1 gram of protein per kg of body weight per day. The animal sources contain a higher percentage of protein when compared to plants. As a result, most of the vegans do not get sufficient amount of nutrition from their protein sources.

Alternative protein is like a child that has been born to curb such increasing demand for animal protein. In a world where veganism has started growing and consumers’ interest is rising towards non-meat protein options, there is a huge and valuable market developing for Alternative Proteins. In recent years, the global demand for meat products has risen dramatically. According to the Food and Agriculture Organization of the United Nations (FAO), global meat consumption is expected to climb by 1.7 percent/year through 2022. However, rising issues over meat consumption such as overuse of water, soil erosion and carbon-based fuel consumption also encourages the rise of alternative proteins. Players in the food business who want to take advantage of the opportunity must grasp the changing market dynamics and make sure how and where such opportunities could be tapped by them in the coming days.

Alternative proteins are plant-based proteins that are developed as alternatives for animal based proteins. Vegans can still consume equal amount of proteins through plant-based proteins. Protein rich oilseeds are soybeans, rapeseed/canola, cottonseed, peanut/ groundnut, sunflower seed, sesame, safflower, flaxseed and linseed. Cereal proteins are Wheat, corn, rice, barley, oats, sorghum and grain amaranth. Legume and pulse proteins are beans, chickpeas, guar, lentils, lupines and peas. Leaf proteins are Alfalfa, Lucerne, tobacco, mulberry bush, grass, sugar cane, sugar beet and clovers and these are being used to make plant-based meat. One particular trend that has developed over the past few years is the development of meat-like products addressed as meat analogues, which can provide a tasty alternative to meat. There are more plant-based meat alternatives today than ever before. Plant-based meat is described as the products manufactured from plant materials that are produced to replicate animal meat in every way, ranging from taste, aroma & touch. It utilizes one or more alternative protein ingredients.

The development of suitable texture and flavour for meat analogues is frequently the most difficult task for food manufacturers. The defining characteristics of current meat substitutes, such as texture, flavour and colour are found to rely highly on the ingredients taken. Therefore, understanding the influence of ingredients on the sensory attributes of meat substitutes is critical. Water (50-80%), textured vegetable proteins (10-25%), non-textured proteins (4-20%), flavourings (3-10%), fat (0- 15%), binding agents (1-5%), and colouring agents (0-0.5%) are all found in a meat analogue. The improvement of the taste and fibrous shape of meat analogue is strongly associated with the substances and processing. Besides protein, non-protein substances play a crucial function, which include the solidification and the flavouring of meat analogues.

Texturizing multiphase blends such as protein and polysaccharides constitutes an anisotropic fabric while natural proteins bring about isotropic fabric. Texturization is a critical step, since customers expect a product with comparable texture, mouth-feel, taste and nutritional value to the ones of meat products. To mimic the fibrousness of meat muscle, plant-primarily based totally proteins ought to undergo a sequence of differences from their local form (globular shape) to attain textured protein (linear shape) via distinctive processing (e.g. extrusion, moist or electro-spinning, excessive heating, easy shearing, freeze structuring, blends proteins- hydrocolloids and 3-D printing).

For someone, being vegan is a dietary choice, while it could be a lifestyle for others. A Plant-based diet involves eating only foods comprising plants that tend to include plenty of fruits, vegetables, beans, nuts and seeds. Binding agents in meat analogues can be animal or plant-based ingredients that act as both water and a fat binder. Soy protein isolate and concentrate, wheat gluten, milk proteins, eggs, carrageenan, xanthan gum and other ingredients are examples of such substances. Some ingredients can act as both binders and extenders depending on the quantities used. Ingredients high in proteins have a primary function of water binding and protein network formation, whereas ingredients with low or no protein levels, such as flours and starches typically serve as fillers, despite their water and fat binding properties through physical entrapment. The effect of different concentrations of binding agents on the quality characteristics and nutritional properties of plant-based analogues is being studied continuously. 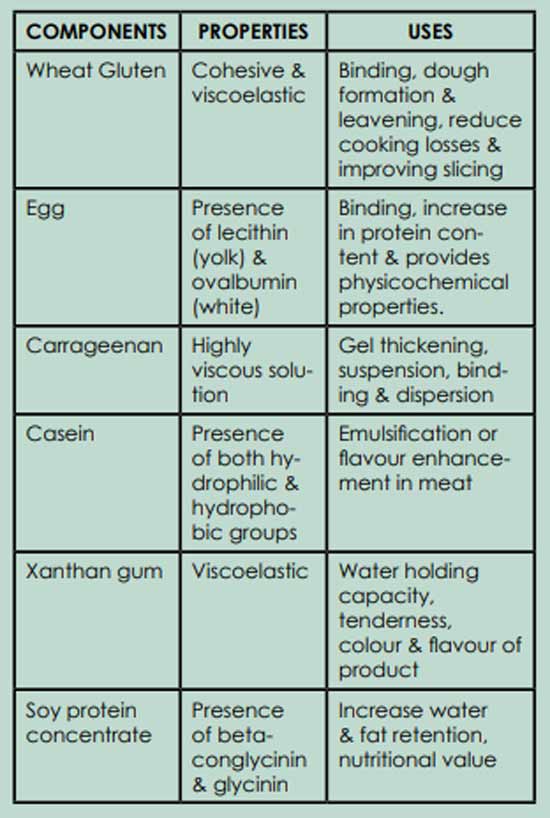 Since the early 1980s, patents on the composition and use of binding agents in texturized products have been reported. Protein binders for texturized proteins containing water or milk with 10-20% gluten, 10-20% whey proteins and 1-5% albumin have been patented, as have wheat gluten, wheat or soy flour in meat analogues resembling chicken. The concentration of the binding agents influences the final product’s properties. The effects of carrageenan, soy protein concentrate, casein and xanthan gum on mushroom-based sausage analogues with 5% saturated fat were studied. Soy flours, soy concentrates and soy isolates have been used in the same way that albumin has, with the isolate being the most preferred due to the absence of any beany taste.

Predominant dietary cause of meat in the weight-reduction plan is offering protein of excessive quality. In case of meat being absolutely changed through meat-analogues, the ones that the merchandise needs to offer is a comparable dietary value. It has been estimated that a meat analogue with a protein content material of as much as 30% with a low fat/ lipid stage may be a great opportunity to meat from a dietary perspective. However, the usual composition of meat and meat analogues and their share need to be taken into consideration while undertaking a comparison for weight reduction plan. Therefore, meat analogues need to possess comparable Protein Digestibility Corrected Amino Acid Score (PDCAAS) as beef, if the beef analogues are to absolutely replace meat in a weight-reduction plan. The latter defined why soy is an appealing choice, as it has an excessive PDCAAS. Furthermore, vitamins such as vitamin B12 (Cobalamin) and trace elements such as iron are considered as essential additions for diets, wherein meat is entirely cut out. However, most meat-eating consumers have an over consumption of protein currently, due to higher intake of animal-based products.

Formulation is important for enhancing the nutritional properties of meat analogues using natural and clean ingredients. However, to mimic the look and taste of meat, brands rely on the use of multiple ingredients, most of which are highly processed and / or genetically modified (GMO). Last year, there was a dramatic shift from GMO to GMO-free, with 39% of imported products declared non-GMO. The naturalness of the ingredients is becoming more important, as consumers increasingly associate health foods with foods that do not contain natural and recognizable chemicals. As a result, 62% of products launched since 2015 and subsequently have been listed as natural. Within this framework, the application of clean label ingredients further strengthens the position of meat analogues in the market not only for vegans and vegetarians, but also for consumers looking for healthier food options. In recent years, these have been replaced by some natural ingredients, including red dyes and most brands focus on clean labels and natural red pigments. In addition, breeding proteins with better nutrition and functionality can reduce anti-nutrients and dysfunction, increase functionality and reduce the level of treatment and the need for masking agents. More research is required to find a solution (ingredient or / and treatment) for obtaining fibre structure using health-promoting ingredients. 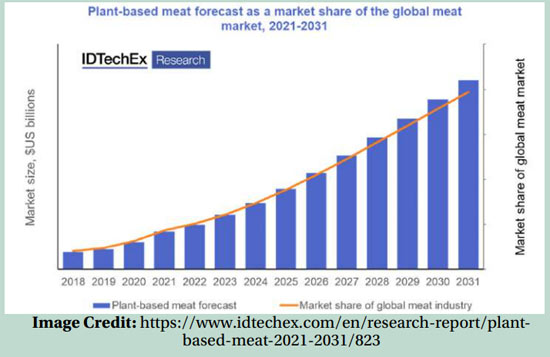 In the case of partial replacement of meat in a diet with meat analogues, the requirements are not so strict. The stronger the replacement of meat through product with a different composition (i.e. containing a higher dietary fibre content) could contribute to a more balanced diet.

In a study conducted at a Sydney Supermarket (n = 137 products), Plant-based analogues contained less energy, total fat and more saturated fat as compared to meat, however, there was adequate presence of carbohydrates, sugar, salt and fibre. In these cases, large amounts of fat, sugar and salt have commonly been used to mask the notes of plants in certain sources (such as legumes) and to enhance the texture of the product. Only 4% of the products were low in sodium (58-1200 mg/100 g), while 24% of the products were fortified with vitamin B12, 20% with iron and 18% with zinc.

Meat analogues are generally classified as super-processed products. However, the law is still unclear and further research on regulatory aspects is needed. It has the potential to be a highly nutritious end product. In particular, the lack of meat-like designations, safety standards and regulations that define standards creates an ethical dilemma that makes it difficult for consumers to understand the health status of these products. This gives room for speculation and social media pressure to create “fake” images of plant-based meat for promotional and smear purposes. 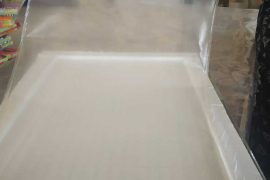 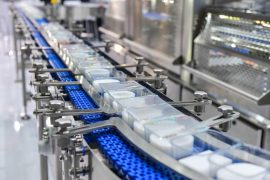