Taco Bell, the Californian quick-service restaurant chain and a subsidiary of Yum! Brands, Inc, has decided and launched a campaign across the board Taco Day. With the ‘See A Six, Catch A Taco’ campaign, Taco Bell is fueling the cricket fever and rewarding fans across the country with a free crunchy taco.

They also started with another campaign earlier this year which was called “I see a taco”, to get fans to start seeing tacos everywhere. In the latest phase of this campaign, the brand has tied into cricket, where a six-hit also resembles the shape of a taco. So, when the Indian cricket team hits a six from October 24 onwards, taco-lovers and cricket fans can get a free taco from the company.

This extreme unique campaign will be starting from 24 October, when India plays their first match. The cricket fan or the taco lovers can just msg TACO on WhatsApp to a number and get a free taco on any order. They will be able to avail of this offer through a WhatsApp QR Code created just for this campaign. The offer will be applicable to all India matches, semi-finals and the final.

“With ‘See a Six, catch a Taco, we will be cheering for the Indian team by rewarding cricket fans with tacos when India hits a six.  We want everyone to try our famous tacos whilst celebrating India’s cricketing triumphs.” Said Ankush Tuli, managing director, Asia Pacific & Middle East, YUM! Brands.

Shining a spotlight on the new campaign, Gaurav Burman, director, Burman Hospitality Private Limited, the company’s exclusive franchise partner in India, said, “Taco Bell is continuing its commitment of offering new and exciting experiences to fans. Cricket is a religion in India, and we wanted to reward fans this upcoming cricketing season. We strongly believe that integrating the country’s passion points with our tacos is one of the many ways for us to strengthen and deepen our relationships with consumers.”

Consumers can avail of the free taco offer in any Taco Bell restaurant across the country or order online through the Taco Bell app to receive their free veg or non-veg Crunchy Taco on any order. For campaign and offer details, taco fans can follow Taco Bell India on their social media channels: Instagram, Twitter & Facebook, or their website. 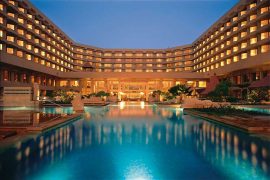