On Friday, the AP state government signed MoUs in the food-processing sector with 8 companies including the Netherlands government. Government representatives of the 7 companies from across the country and the Govt. of Netherlands signed the MoU in the attendance of CM YS Jaganmohan Reddy at his camp office in Tadepalli.

These companies would assist farmers via the state government in the food processing sector, such as harvesting, processing and packaging of fruits, vegetables, fish and aqua products.

The Netherlands government would aid the state government and the peasants in food processing, packaging, technology, containers and other areas.

IFB, one of the companies would be helping the state government and the agricultural laborers in fish and aqua culture including processing, packaging, technology, and export. The State government is aiming on maximum usance of aqua base in the state. The government had already come up with Fisheries University in West Godavari where the farmers are occupied in aqua and fish culture.

Another firm, ITC, would aid the government in mango and chillies. Mangoes are cultivated mostly in Vizianagaram, Krishna and Chittoor districts, which have huge demand in Western countries. The Lawrencedale Agro Processing India Private Limited too had signed the MoU in Mango, while BigBasket had signed the MoU for harvest and processing of bananas and tomatoes.

The representatives of the NRC have also launched the dry fruit banana products, which have improved marketing facilities in the world.

Jaganmohan Reddy had appealed the officials of these companies to assist the peasants in the state in food processing industries. 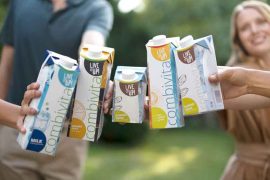